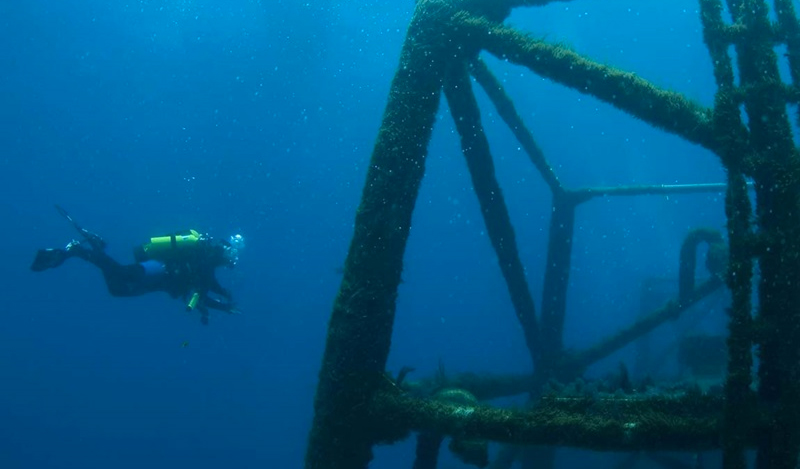 Victoria has a great range of exciting scuba diving locations to keep even the keenest scuba diver busy.

Discoveries in the bay

Dive Port Phillip Bay and discover more than 60 nineteenth-century shipwrecks and four submarines that were sunk during World War I, seahorses and soft corals. Port Phillip Heads are home to some of the most spectacular wall dives in Australia that start at a depth of about 12 metres and extend beyond 90 metres. If you prefer shore diving, head to Mornington, Portsea or Rye piers.

Just over an hour’s drive south from Melbourne with an easily accessible carpark positioned right of the pier, Flinders Pier is perfect for a day trip out of Melbourne.
Located in a protected pocket of the Mornington Peninsula coast, the waters around Flinders Pier are accessible under most weather conditions, although it’s best dived on a northerly winds below 20 knots on an outgoing tide, and best avoided when strong southeast winds are present.
Maximum depth across the pier is 7 metres, though interesting flora and fauna can still be found at shallower depths of 1 to 3 metres, making this an enjoyable site for snorkelers and divers alike.

Dive the wreck of the HMAS Canberra – Victoria's first artificial reef created for the sole purpose of dive sports. Join the many curious divers who Drop 28 metres below the waves of Bass Strait to explore the flight decks, the bridge, engine rooms and galley.
To gain access divers must either book a dive tour with a licensed tour operator or book a slot on the public mooring through Parks Victoria. There are four moorings and the site can accommodate approximately 60 divers at any one time.

In 1914/15 the Britsh Admiralty received information that the German Navy were developing a submarine capable of surface speeds in excess of 20 knots. In order to combat this threat The Admiralty designed and constructed the J Class Submarine (nick named REAPERS). The J Class Submarines were attached to The 11th Submarine Flotilla and all ships saw heavy action in WW1. After the war 6 remaining J Class Submarines were given to Australia along with 6 destroyers. The ships arrived in 1919 after a lengthy voyage from England during which a number of the Submarines had to be towed by surface craft. The ships were given an extensive refit in Sydney and were attached to Osmond House in Geelong. The ships did not live up to expectations, were expensive to keep and were out dated. By May 1927 only the J-7 was still afloat. The J-4 after being salvaged from where it had sunk off Williamstown was sold to The Melbourne Salvage Company and later scuttled outside the Heads. The J-4 was located by members of The Melbourne Bottom Scratchers on 16 May 1982.

The Eliza Ramsden was regarded as the finest vessel of the Port of Melbourne in 1875, built to order by S. Ramsden at a cost of 10,000, and named after his wife. The vessel was badly damaged in 1875 when it ran aground and was trapped on Corsair Rock on its voyage from Melbourne to Newcastle. The owner's son was the only passenger aboard with the 13 crew. The ship was evacuated by a lifeboat sent by the steam tug Warhawk when it was assessed that it would go down once the tide rose. Most personal effects were left on board. When the tide rose, the vessel floated off Corsair Rock and eventually sunk in the South Channel.

Named after its mushroom shaped reef, Mushroom Reef Marine Sanctuary protects 80ha of the open coast of Flinders on the Mornington Peninsula. Composed of sandstone rock platforms extending from the shore, the park includes sheltered rock pools, coves and a shallow reef on the ocean side. The reef is formed from ancient basalt which has weathered beautifully, allowing creatures to hide within crevices and cracks or under loose rocks.
This area is famous for its diversity of marine life and has attracted scientists for over 100 years. The intertidal soft sediment is an important feeding and roosting habitat for many birds. When searching the rockpools one can find many crabs, multicoloured cushion seastars, numerous species of snails and delicate anemones.

Just off the coast near Port Campbell, The Arches Marine Sanctuary protects a remarkable seascape. This area is known for the above water limestone landscape, however 19 to 25 metres below the waves there is a labyrinth of towering limestone canyons, caves, arches and walls. It is these structures which give the park its name. The area is characterised by high energy waves and cool water with flows from the Southern Ocean.
The complex structures beneath the waves provide a foundation for brilliantly coloured seaweeds and sponges to grow on. Due to the shaded underside of the underwater arches, habitats here are typical of those found in the deeper waters of Bass Strait.

Located at Aireys Inlet, this park protects 17ha of ocean waters and projects about 300m offshore. Composed of both hard basalt and rubbly limestone, the cliffs are full of caves and ledges. The shore is covered with boulders and offshore there are two large rocks: Eagle Rock and Table Rock. Table Rock has been levelled by incessant waves whereas Eagle Rock is a tall volcanic stack capped by limestone.
The intertidal and subtidal, basalt and sandstone reefs provide habitats for many species. The rock platforms are covered in the iconic brown seaweed Neptune's Necklace which is unique to Australia and New Zealand. Within the rockpools you can find fascinating creatures such as octopus, chitons and decorator crabs.
Offshore, Eagle Rock and Table Rock are fringed with swirling Bull Kelp and in deeper waters colourful sea tulips and encrusting sponges can be found. The beautiful habitat provided by these species supports a vast array of marine life from wrasse and mullet to Cat Sharks, Port Jackson Sharks, skates and rays. Many birds use the area as feeding and roosting habitat and at certain times of year you may also be able to spot whales passing through the area.